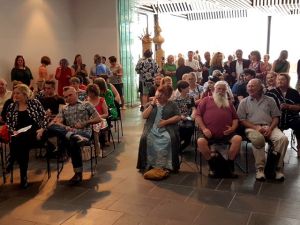 Weathering the Future has been officially launched!

We were very pleased to be joined by Ballarat City councillor Belinda Coates, who gave a short address at the launch ceremony, which was introduced by the Art Gallery of Ballarat’s Peter Freund. The exhibition is run under the council’s community arts program through Backspace Gallery.

Jessica Wilkinson, Fraser Mackay and Kirstyn McDermott read their works from the exhibition, with an introduction by Weathering the Future curator Jason Nahrung, before Art Gallery of Ballarat director Louise Tegart officially launched the exhibition.

The icing on the cake came with Reuben Morgan playing his piano piece “Mother Earth”, written for the exhibition.

A rough count put the audience at more than 140, and two sales were recorded, which was especially gratifying.

The exhibition continues Thursdays to Sundays, noon-4pm, until and including December 23.

Jessica Wilkinson reads during the launch.

Fraser Mackay reads during the launch. 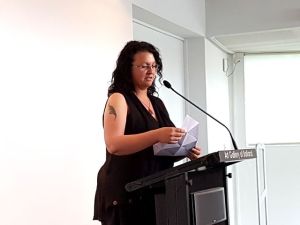 Kirstyn McDermott reads during the launch. 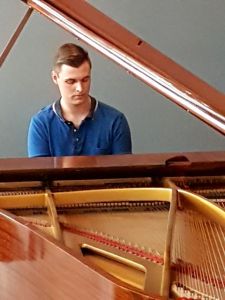 Reuben Morgan plays his composition “Mother Earth” during the Weathering the Future launch.